The Santa Fe Trail served as the pioneer highway from 1821 to 1872 as a link from the east to Santa Fe, New Mexico. The trail allowed traders to move goods across the country safely and easily. Nine miles west of Dodge City you can see the most clearly defined rut trails, still visible after almost 150 years. 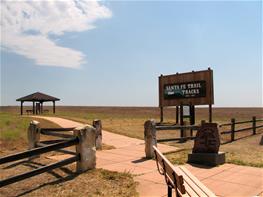 The site is nestled among the gently rolling hills of the Kansas plains, where the breeze moves the grasses and the peace of nature accompanies this enduring piece of unique history. Don't miss the opportunity to see this rare landmark.

The Soule Canal, listed on the National Register of Historic Sites, includes the Eureka Irrigating Canal. This ditch and canal were put under construction in 1883, by Asa T. Soule, a prominent Dodge resident, and can only be seen as nothing less than an engineering marvel from the 19th century.

The Demise of the Canal

The canal was intended to bring water from the Arkansas River to fields needing irrigation. Unfortunately similar projects upstream and prolonged drought led to the abandonment of the project. It however, goes down as a major human accomplishment of imagination and construction.

Check out a mobile narrated tour of the Santa Fe Trail