Dodge City is a pure definition of the West, a gateway to history that began with the opening of the Santa Fe Trail by William Becknell in 1821 and became a great commercial route between Franklin, Missouri, and Santa Fe, New Mexico, until 1880. 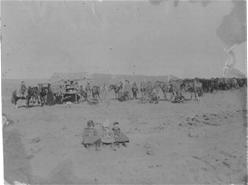 Thousands of wagons traveled the Mountain Branch of the trail which went west from Dodge City along the north bank of the Arkansas River into Colorado. For those willing to risk the dangers of waterless sand hills, a shorter route called the Cimarron Cutoff, crossed the river near Dodge City and went southwest to the Cimarron River.

In those days, safety from marauding Indians was essential. Fort Dodge was established in 1865 on the Santa Fe Trail near the present site of the city, offering protection to wagon trains, the U.S. mail service, and serving as a supply base for troops engaged in the Indian wars. Kiowa, Cheyenne, and other plains tribes inhabited the area, and wild game was abundant including vast herds of buffalo.

Just six years later in 1871, five miles west of the Fort at the foot of a hill along the Trail, a ranger by the name of Henry L. Sutler constructed a three-room sod house. Sutler's home, built to oversee his cattle ranch, became a frequent stopping place for buffalo hunters and traders. Dodge City was founded the next year, 1872, just five miles west of Fort Dodge on the edge of the military reservation, with the Sutler's home as the first building. It quickly became a trade center for travelers and buffalo hunters.

By September of 1872, the shiny steel rails of the brand new Atchison, Topeka, and Santa Fe railroad stretched into view - and a town was waiting. The railroad initiated tremendous growth for many years. Already, south of the tracks, hastily built frame buildings, and tents were housing two grocery and general merchandise stores, a dance hall, a restaurant, a barber shop, a blacksmith shop -- even a saloon next to Sutler's original sod house. The famous Front Street legend had begun. Dodge City was already setting a record for growth.

Stacks of buffalo hides towered along Front Street - filthy buffalo hunters and traders filled the town's establishments - and the term "stinker" was coined. Trainmasters would take their red caboose lanterns along when visiting the town's "soiled doves" - and the term "red light district" came to life.

The Wickedest Little City in the West

During those early years, Dodge City also acquired an infamous stamp of lawlessness and gun-slinging. There was no local law enforcement, and the military had no jurisdiction over the town. Buffalo hunters, railroad workers, drifters, and soldiers scrapped and fought, leading to the shootings where men died with their boots on. This created a hasty need for a local burial place - Boot Hill Cemetery. 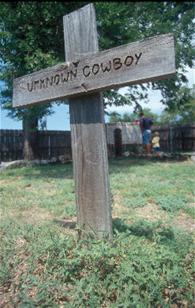 For six years before Boot Hill, Dodge City had no official cemetery. Persons dying who had friends, enough money, or sufficient standing in the community were buried in the post cemetery at Fort Dodge. Others, penniless or unknown, were buried where it was convenient to dig a hole. The cemetery was used until 1878 and is now part of downtown Dodge City.

The Importance of the Buffalo

Dodge City was the Buffalo capital for three years until mass slaughter destroyed the huge herds and left the prairie littered with decaying carcasses.

An estimated 850,000 buffalo hides were shipped from Dodge City in the years 1872-1874. Farmers, during hard times, gathered the buffalo bones and sold them for six to eight dollars a ton. The bones were used in the manufacture of china and fertilizer. By 1875 the buffalo were gone as a source of revenue, but the Longhorn cattle of Texas drove the dollars into town. For ten more years, over five million head of cattle were driven up the Western Trail (earlier known as the Texas Trail) to Dodge City. Law and order came riding into town with such respectable officers as Bat Masterson, Wyatt Earp, Bill Tilghman, and Charlie Bassett. Out of these personalities evolved the famous fictional character, Marshal Matt Dillon. The town these early men knew was laid out with two Front Streets, one on either side of the railroad tracks. The city passed an ordinance that guns could not be worn or carried north of the "deadline" which was the railroad tracks. The south side where "anything went" was wide open. In 1876 the population was 1,200, and nineteen businesses were licensed to sell liquor.

During those five years, the population varied according to the season, swelling during the summer, with the influx of cowboys, buyers, gamblers, and prostitutes. Business houses, dance halls, and saloons catered to the Texas trade. 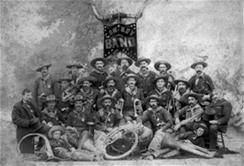 Saloon keepers renamed their places, Alamo and Lone Star and served brandies, liqueurs, and the latest mixed drinks. Ice usually was available so even beer could be served cold. Some saloons advertised anchovies and Russian caviar on their cold menus. Gambling ranged from a game of five-cent "Chuck-a-luck" to thousand-dollar poker pots. Many saloons offered some type of musical entertainment - a piano player, a singer, or as in Chalk Beeson's Long Branch, a five-piece orchestra. Beeson also organized and led the famous Cowboy Band which entertained all over the west at cattlemen's conventions, concerts, dances, and in Washington, D.C. at the inauguration of President Harrison.

Fort Dodge was closed in 1882 and by 1886, the cattle drives had ended. An illustrious period of history was over but the legend lives on in Dodge City's historic preservation of its romantic and internationally famous past.

As the nineteenth century ended, the bragging of the western pioneer furnished an abundance of materials for dime novels, nickelodeons, Hollywood films, radio, and television. Even today, over 100,000 tourists relive the legend each year by visiting the Boot Hill Museum and the historic Front Street reconstruction. "If the history of the West has been a mother lode of entertainment riches, Dodge City has been its touchstone."